Matt was diagnosed with a grade 4 glioblastoma in 2019 and went on to have surgery on his 40th birthday. Given a prognosis of 12-18 months to live, Matt shares his story on his 43rd birthday, 3 years after his original operation.

The first innings by Matt Rowett

“If you hit plenty of runs in your first innings, you can push a few singles and take it easy in your second innings. 80 plus are bonus years to celebrate a life lived well.”

“I’m just a regular bloke and that’s how I like it. I grew up on a farm, played footy, tennis and cricket. Attended the local public school and went to church on Sunday’s.

My wife Kriena and I decided to start a family in our mid 20’s. We have 4 children that we adore and have fostered children since 2014.

In December 2018 I was working long hours under stress and I began to feel different and not a good different. I was waking up in the night unable to get back to sleep and was getting out of bed and going to the lounge in an attempt to settle my body and mind down. I didn’t know what was wrong and I recall that after a couple of months of this I spoke to Kriena about it. One night I was standing at our kitchen bench before going to bed and I said to her “there’s something wrong with me, I don’t know what it is but I feel off balance in my chest’’. I brought my annual checkup forward and asked Dr Mahmood to test for everything. I had full blood, urine and stool tests which all came up clear. I was also having a few headaches which was unusual for me. Dr Mahmood asked me how much I was working and how much sleep I was getting, to which I responded that I was working 50-60 hours per week and getting 6 hours sleep per night. He told me that wasn’t sustainable and to look after myself better and see what difference it would make, however the symptoms remained

We had a family trip to Lawn Hill (far north QLD) planned for the April school holidays 2019 covering over 6,000km in 3 weeks. Leading up to this trip I was working extra hard to get away from work and was getting more headaches. We made it to Ayers rock on the 12th of April and all 6 of us made it up to the top, with Bella on my back for most of the climb. Kriena drove us the last few days home as my headache was there most days and my driving was being affected. I returned to work on the 28th of April 2019. The first week of May the headaches continued, and I went back to Dr Mahmood. He got me to walk slowly in along a line on the floor but I couldn’t keep my balance. He booked me a CT scan in Naracoorte the next day. The young lady that carried out my CT scan in Naracoorte left the room to get the results and when she came back into the room I could see from her face that it wasn’t good. She let me know that something had shown up on the scan and I needed to go straight to the Mount Gambier hospital to get better images with an MRI scan. After 6 hours waiting in emergency with a splitting headache, I was losing my patience and wanted answers or I was out of there. Kriena and I were pulled aside and asked if we knew why I was being kept there, with my response of no they said I had a 7.8 cm legion (tumour) on my brain and that I was to be flown to Flinders Hospital as soon as possible. I was admitted to the Mount Gambier Hospital that night to be flown out the next day. 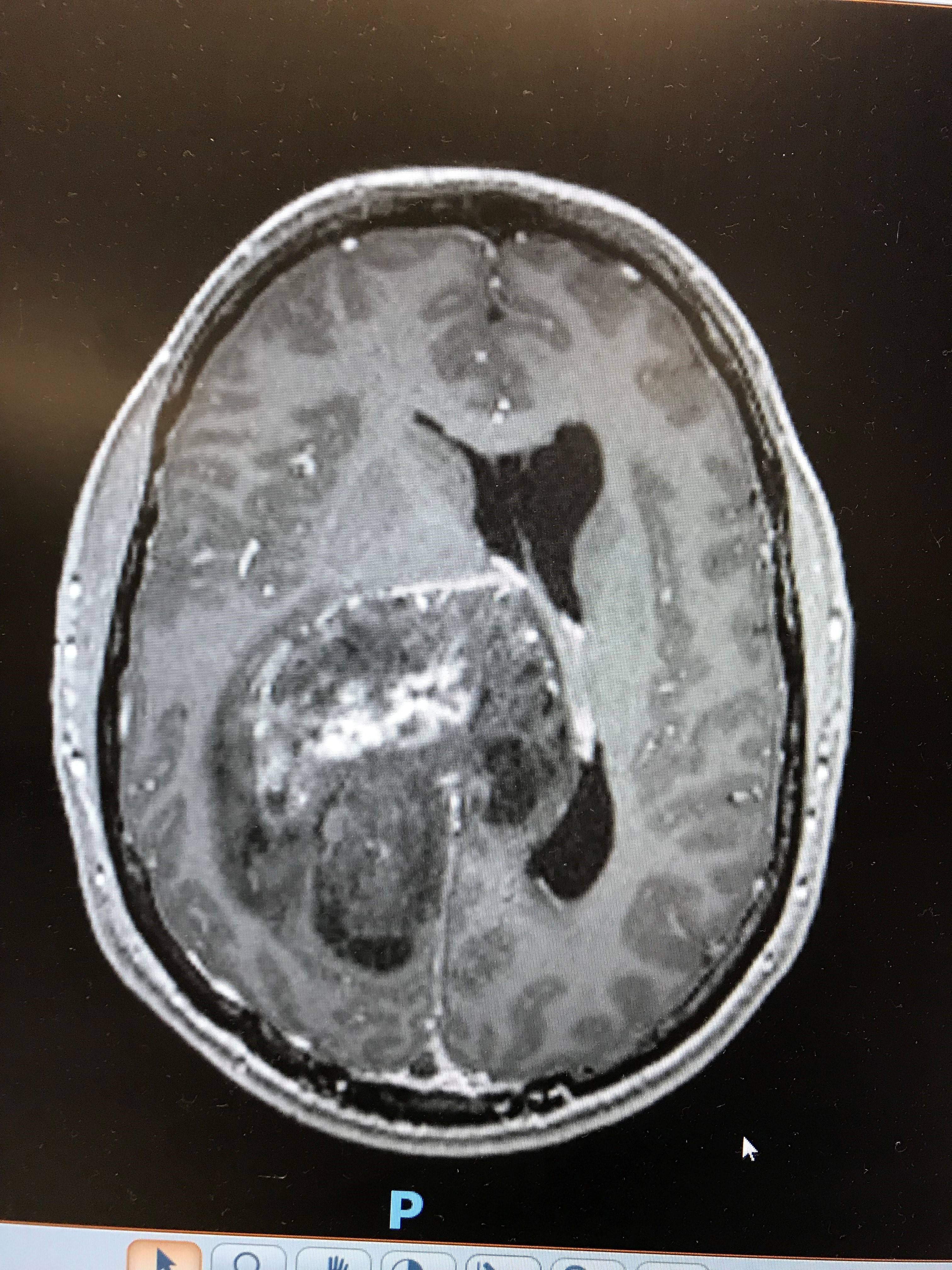 My flight to Adelaide included a high dose of Endone which reduced the headache and sent me as high as a kite. Kriena called on family and Friends to help with children and to get her up to Adelaide to meet me as I got off the plane and arrived in ambulance from the airport to Flinders Hospital emergency department. Once in the hospital I was greeted by a number of the surgical team that had analysed my scans. I got up off the bed to greet them and I watched their jaws drop. They said that they couldn’t believe that I could still function properly given the size of the tumour in my head. Given I was doing ok they decided they had time to better plan my operation, so they admitted me to Flinders to get better scans and booked the operation for 8am on the 15th of May, which happened to be the day of my 40th Birthday. The headaches continued to get worse and in the days before the operation I was having trouble speaking, walking and feeding myself. The tumour was starting to shut down my body functions.

The night before the surgery the kids brought in cupcakes they had made and sang happy birthday to me.

Dr Nick Vrodos and his team took to work on me on my birthday and once they opened me up they found a tumour which was a series of jelly tentacles in a lump and wrapped in to my brain. In this operation they were able to remove 70% of the visible tumour before the tumour started to break up. We were later told that they expected from the scans that the tumour was benign and would be a solid lump only to find what was a grade 4 glioblastoma cancer tumour, the deadliest cancer in the world. The following day my surgeon visited Kriena and I in the recovery ward and informed us of the diagnosis of the prognosis being 12-18 months to live with no known cure. Their advice was to go on a good family holiday while I was still well enough to do so as it would be our last.

In that instant I said to myself, that’s not me, I have 4 children to raise and I’ll do anything to live. I was still in a huge amount of pain and recovering from the operation however that same day they told me they wanted to open me up again and go in from a different angle to get the remaining 30% of the visible tumour. The 12 hours following the operation in the recovery room was the worst 12 house of my life and I wasn’t sure I had the strength left in me to go under the knife and anaesthetic again however they explained they would just cut me in the same spot, unscrew the screws they’d used to close me up and get it done. As soon as I woke up from the second operation my headache had reduced from a pain level of 9-10 to a 7-8. They still had me on a high dose of Endone to recover, however the high from the first dose wasn’t repeated and it made me sleep.

I owe my life to Dr Nick Vrodos as I later found out that when my scans got sent through from Mount Gambier to Flinders the second best Neurosurgeon in South Australia reviewed them and decided it was too big for him to take on and called on Nick to do the operation. I have also been told that it is unlikely any other surgeon would offer to go back in for a second removal operation given the high level of risk. I guess you can call that a lucky break. 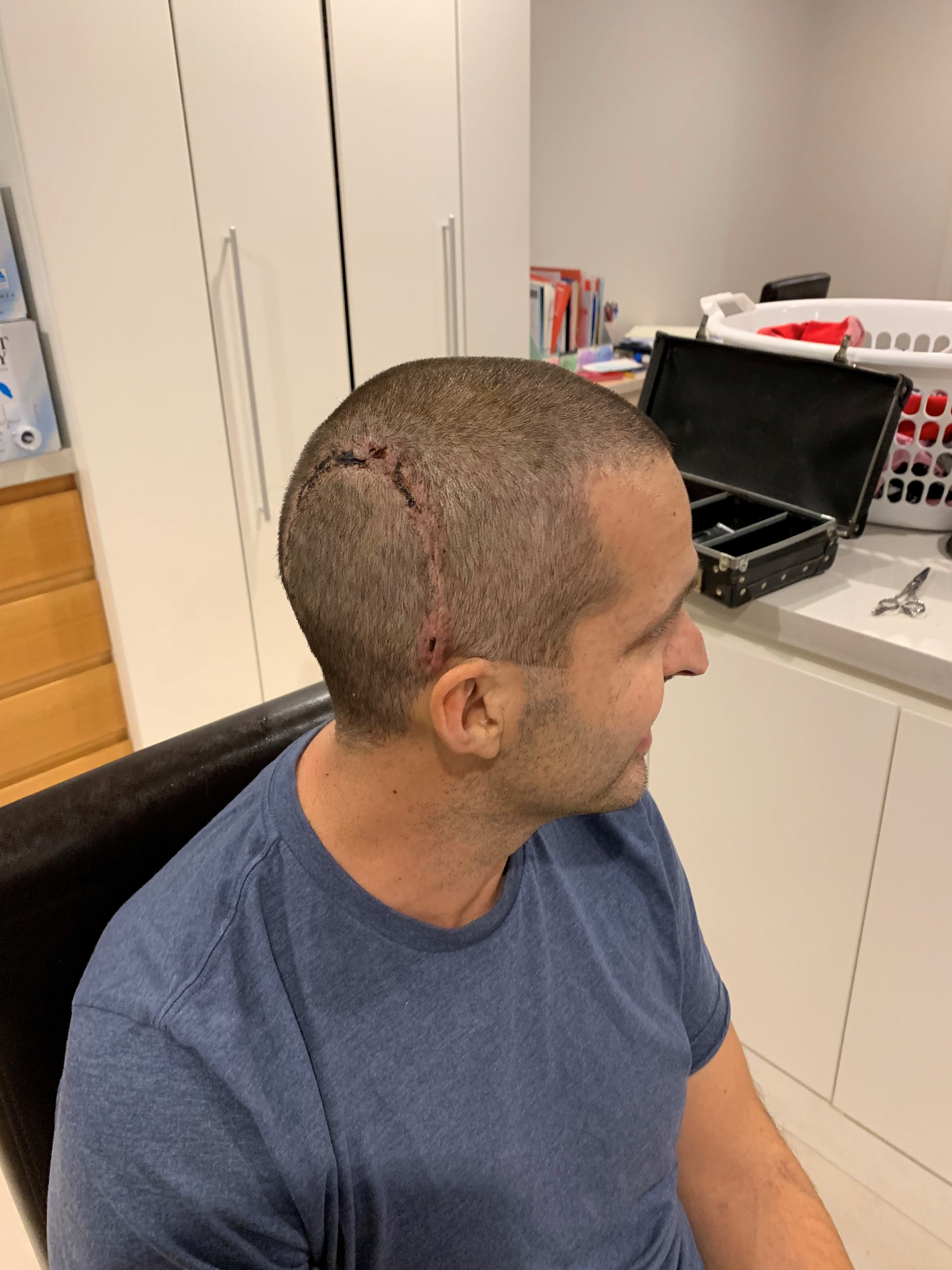 With the visible tumour out my next life saver kicked into gear, my wife Kriena. As I woke from the second operation she was by my side telling me that she had found people who had survived this cancer and lived for 5, 10 and even 15 years. She asked what I was willing to do and I said I would do anything she suggested as long as she got clearance from our great friend and local pharmacist, Arn Doan. The two of them researched to develop a plan to kill the cancer cells and keep my immune system strong enough to kill the cancer stem cells. In the days after the operation I was told I had 12 to 18 months to live. I asked about radiotherapy and chemotherapy and they told me that they had already allowed for that and that it would only make 1-2 months difference to my survival time. That wasn’t good enough for us so we hit it with everything we could and as hard as we could. I had 6 weeks of daily radiotherapy to the brain at Flinders (30 daily 15 minute treatments), while at the same time starting the chemotherapy which was a tablet taken for that 6 weeks.

My body made it through that 6 weeks better than I had expected, but the radiotherapy had burned my hair off and the drugs they had me on to reduce brain swelling from the operation had me looking like a moon faced criminal. It was about this time that I set the goal of living until I was aged 60. By then I would have walked Lauren and Bella down the aisle at their weddings and 20 year survivors were rare but they were out there.

I’ve now lifted the bar on my end date to age 95. I reckon I’m living a lifestyle now that holds me in good stead to live well for a long time. It’s now been 3 years since the operation and with a 3 year survival rate of around 2% for a grade 4 glioblastoma, it seems I’m hard to kill and I’ve sure got a lot to live for.

I’m grateful every day for the sun coming up so I can turn my face to it to fill me with energy to live well and lead others to live a better life.

I’m just walking out to the crease to open the batting for my second innings. I’ve got plenty of runs on the board and I have had the firsthand lesson that life is a journey not a race to the finish line. My goals book has some new entries in it and I’m enjoying my family, my friends and my work more than I ever have.

Life is an empty book waiting for you to fill in the pages with your story. Surround yourself with people who will support you through the good and bad that life brings. Set the bar high for how you want to live and respect your body, your family and your friends as you never know when you may need their support to get you back on the road when you hit some rough patches. Being healthy requires you to by physically, mentally and emotionally well as if one of these aspects isn’t at the right level the others aren’t able to be either.

You have my personal email and phone number so if I can help you find the right path for you, please reach out and I’ll enjoy giving you a hand as I know that if I ever need one, you’ll be there for me.” 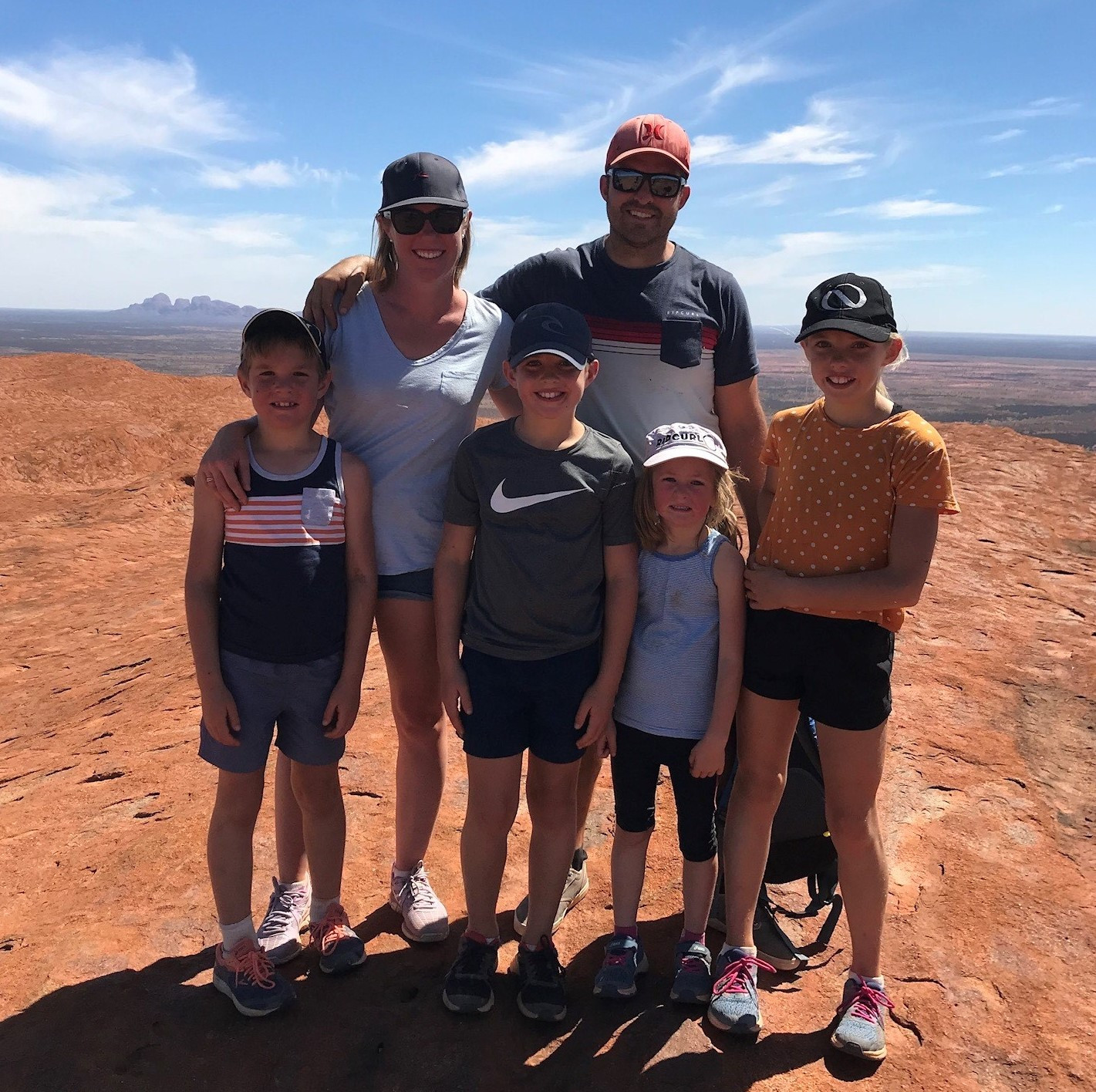 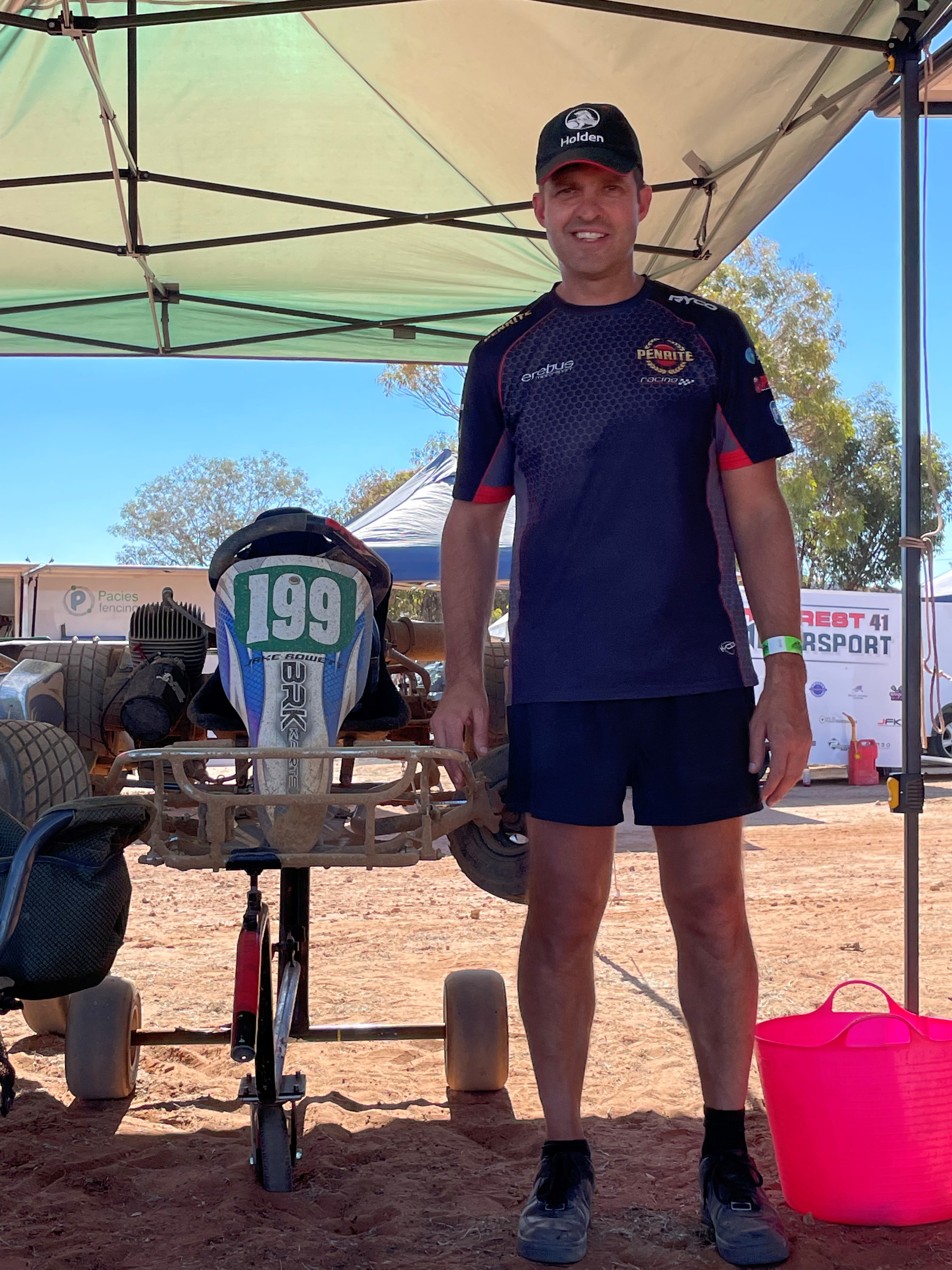