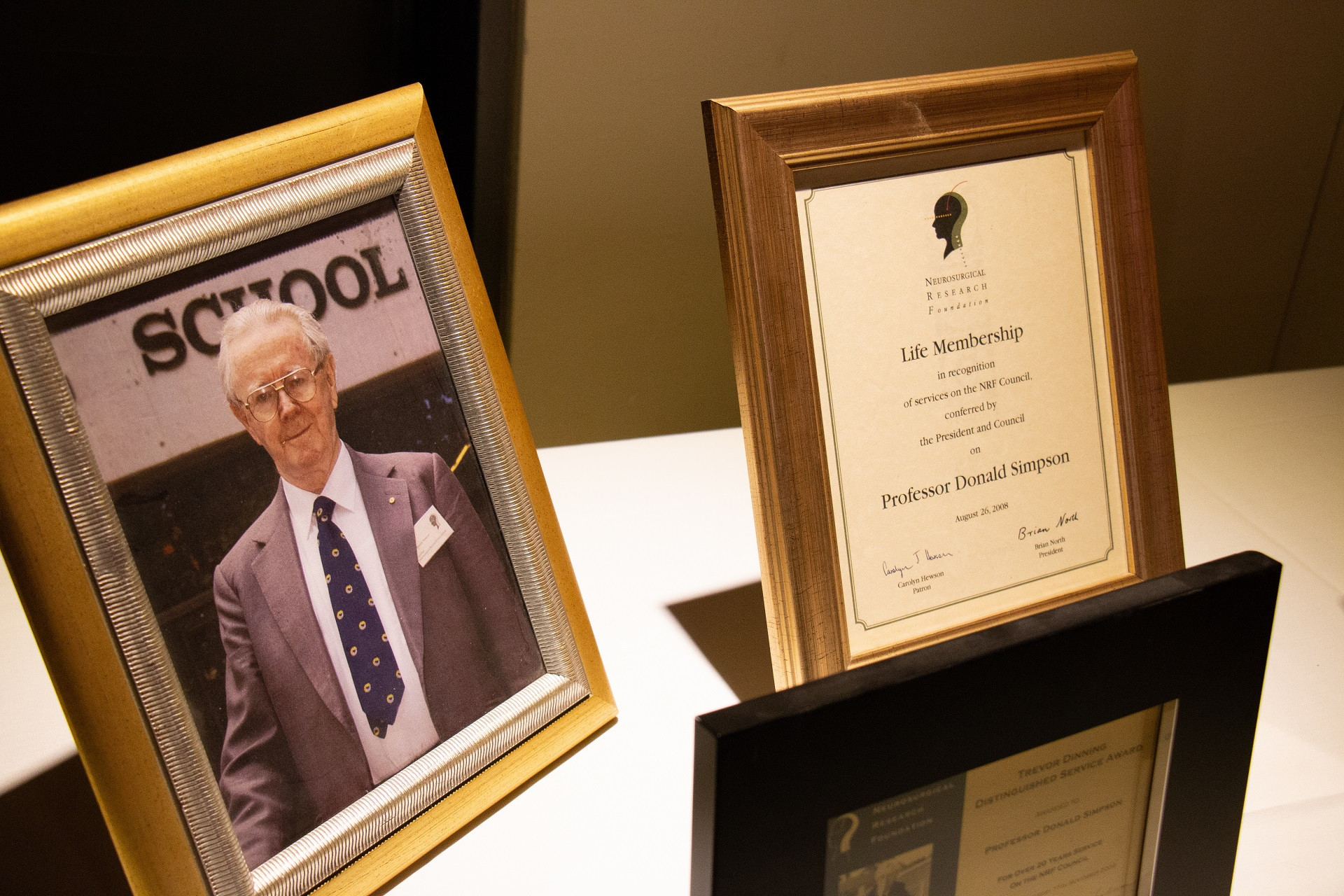 On Friday 2nd November the Neurosurgical Research Foundation hosted a dinner at the National Wine Centre to recognise the contributions of Professor Donald Simpson to Neurosurgery, neurosurgical research and the NRF.

The guests included the Honourable Hieu Van Le AC Governor of South Australia and Mrs Van Le, 140 friends and colleagues and members of the Simpson family. 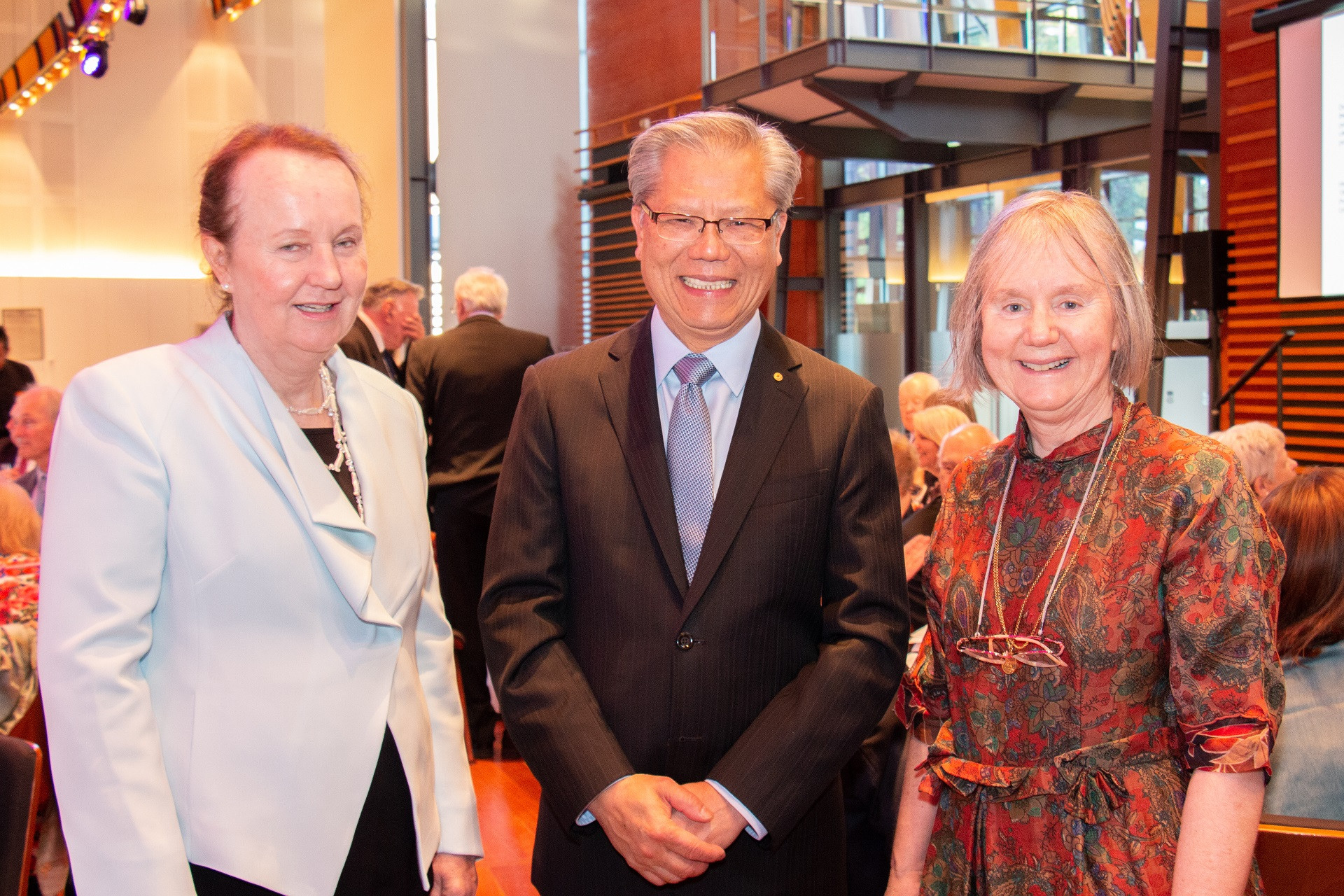 His Excellency spoke with great feeling of his and his wife’s history as boat people, their arrival in Adelaide in 1975 and their welcome by members of the Indo-Chinese Refugee Association of which Donald Simpson was a founder and first president. He spoke of Donald’s conviction and passion and the high regard in which he and ICRA were held by the Indochinese refugees.

Several of Donald’s former colleagues spoke of aspects of his career, of interests that they shared and personal memories.

Brian North succeeded Donald as President of the NRF. Donald’s desire to foster knowledge and research underpinned his role in co-founding the NRF with Trevor (Jim) Dinning and the successful drive to establish Australia’s first academic chair in neurosurgery in 2004. Brian acknowledged the great support given to the NRF by the Simpson family, their relatives and friends. 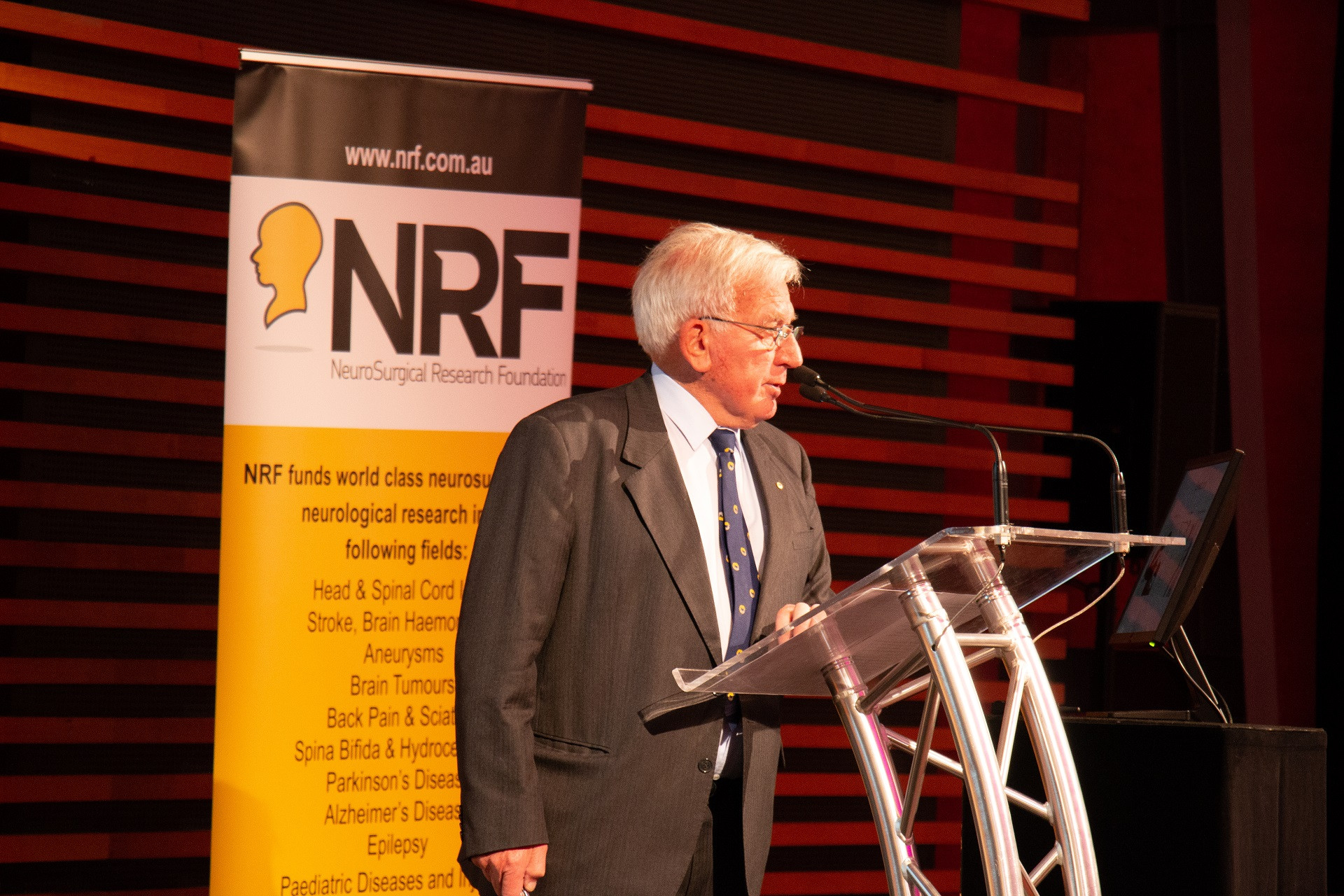 Gavin Fabinyi neurosurgeon from Melbourne shared a collector’s passion for medical history and antique medical texts. Donald was an outstanding medical historian. Gavin travelled with Donald to the first conjoint Vietnamese Australasian neurosurgical meeting in 1993. He noted the respect with which Donald was held in Vietnam and indeed in Asia generally. 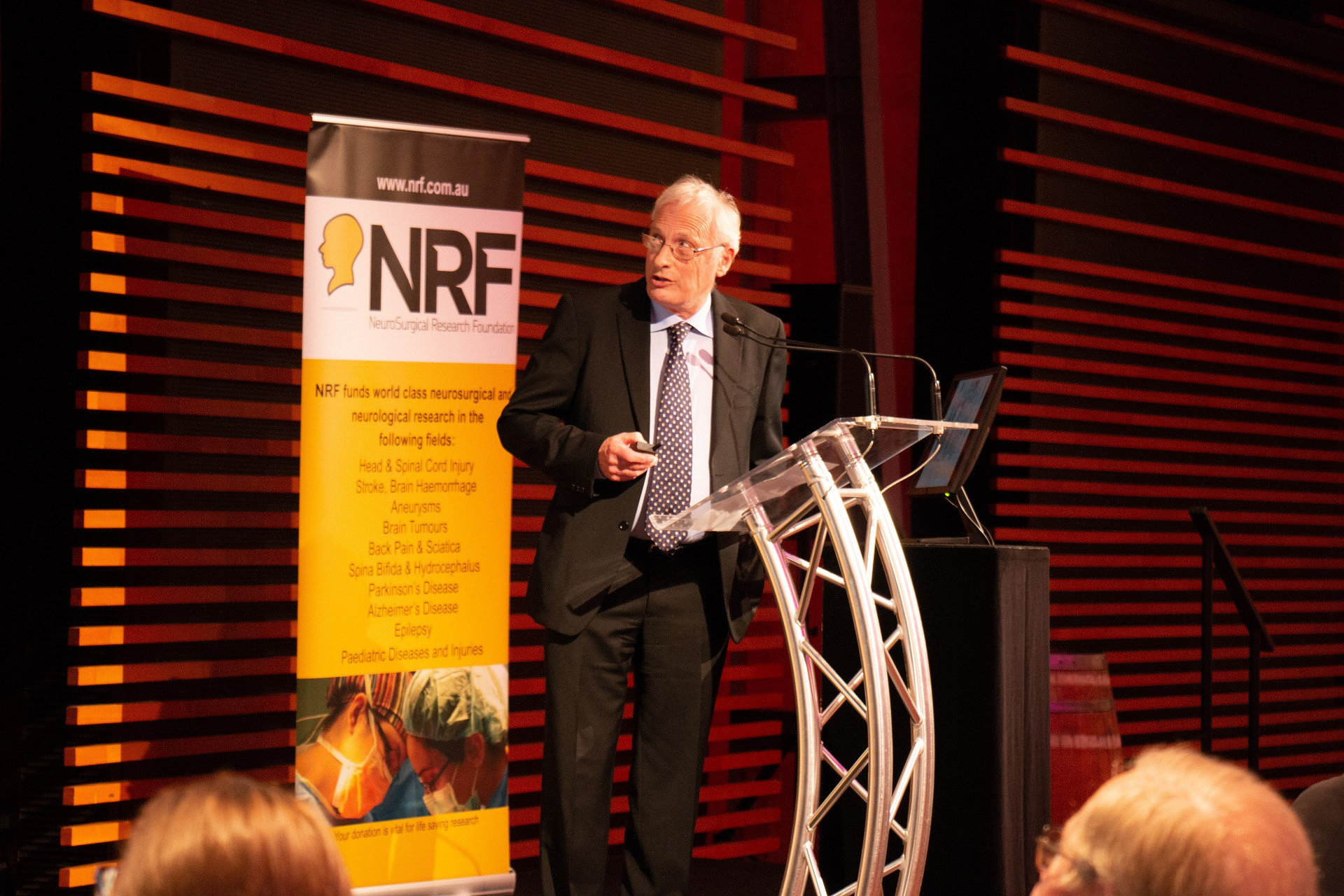 Ken Clezy, the first resident in the fledging department of neurosurgery at the RAH in 1956, gave some insights into the challenges faced by Jim Dinning and later by Donald in establishing the speciality. Ken applied his training in neurosurgery, in which he was supported over many years by Jim and Donald, to his work as a general surgeon in New Guinea and other developing countries. He maintained a lifelong and deep friendship with Donald. 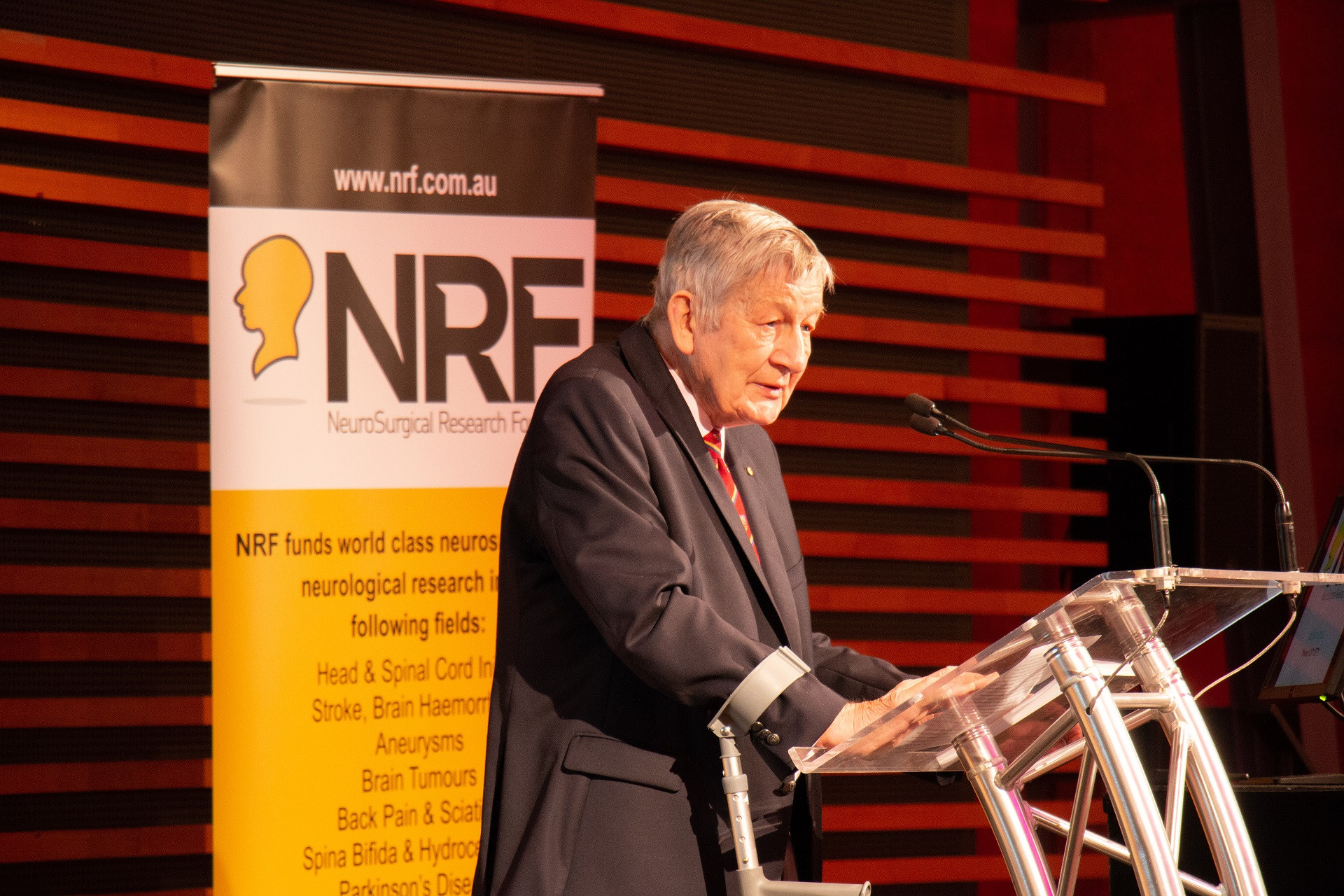 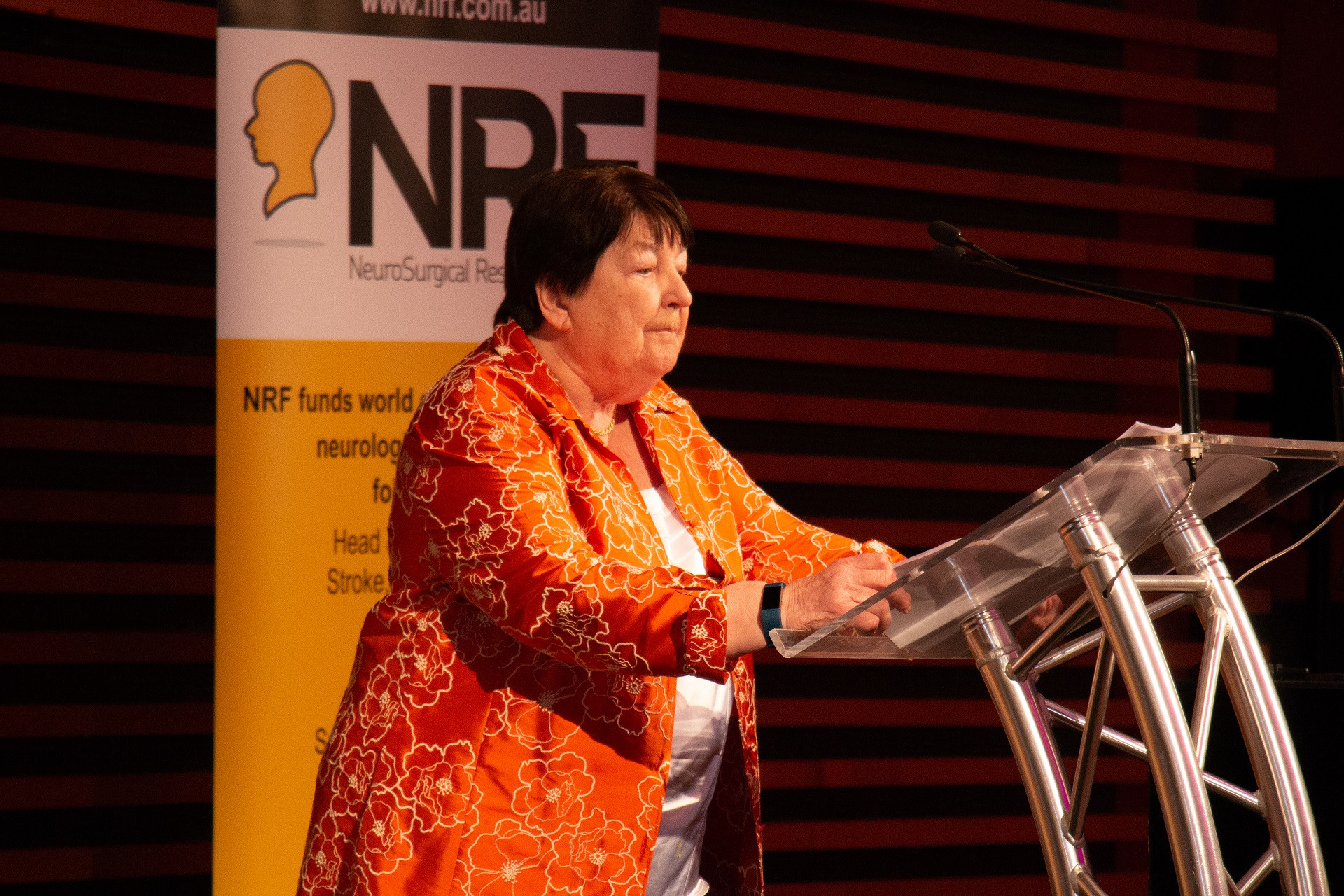 David David craniofacial surgeon acknowledged that the high regard in which Donald was held by his colleagues played a key role in enabling them to establish the craniofacial unit in Adelaide in 1976. Donald was a strong supporter of multidisciplinary care and David recalled with amusement their joint Laurel and Hardy presentations at several scientific meetings.

Annabel Carney physician for many years in the multidisciplinary Spina Bifida unit at the ACH described the formal weekly ward rounds, the depth of care given to each patient and their family and the reverence in which Donald was held by them and by every level of the ACH staff. 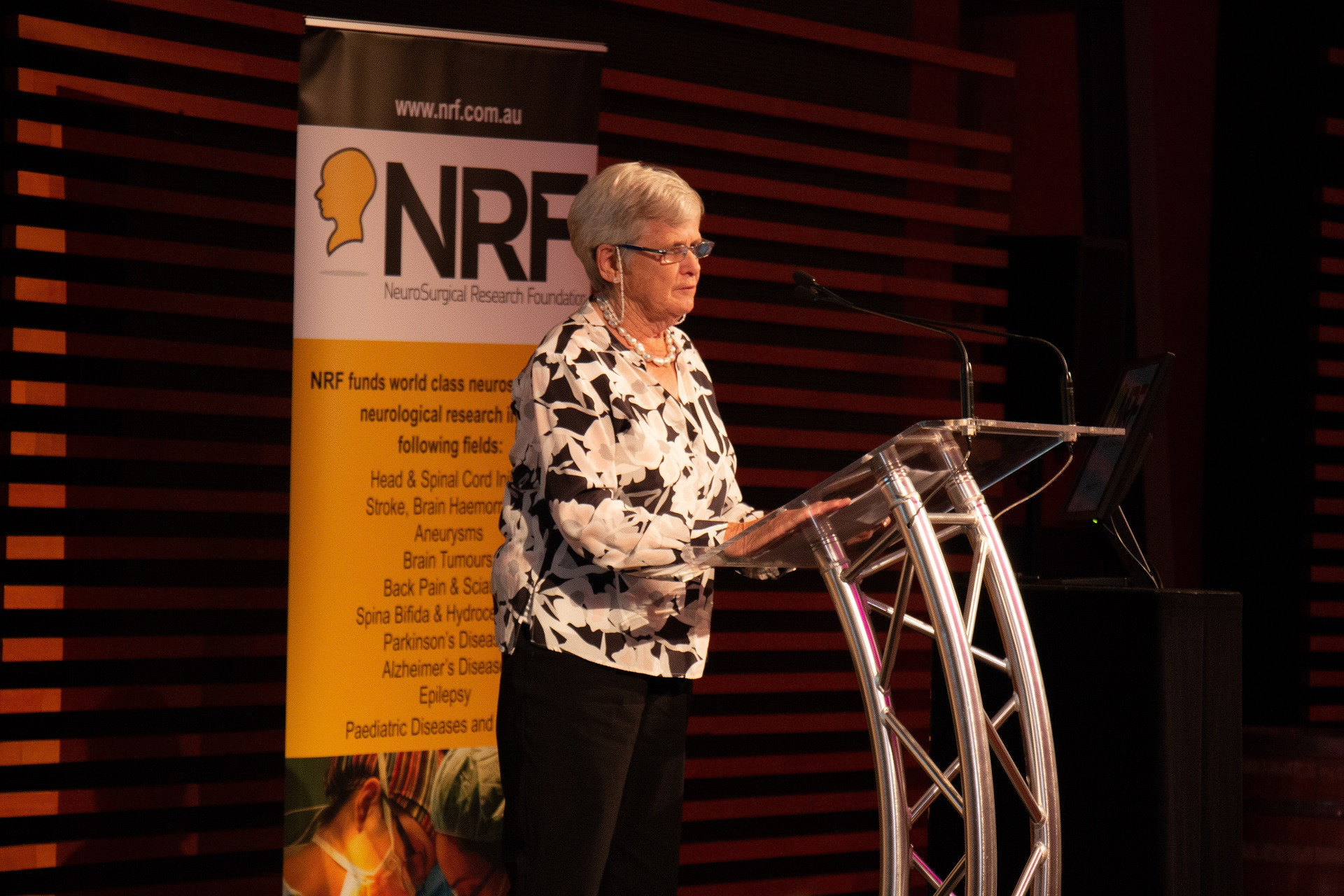 A contribution from Jack McLean, former head of the Road Accident Research Unit was read by Carolyn Hewson. Jack recalled Donald’s long interest in the neuropathology of trauma and their association particularly after Donald retired from clinical work. 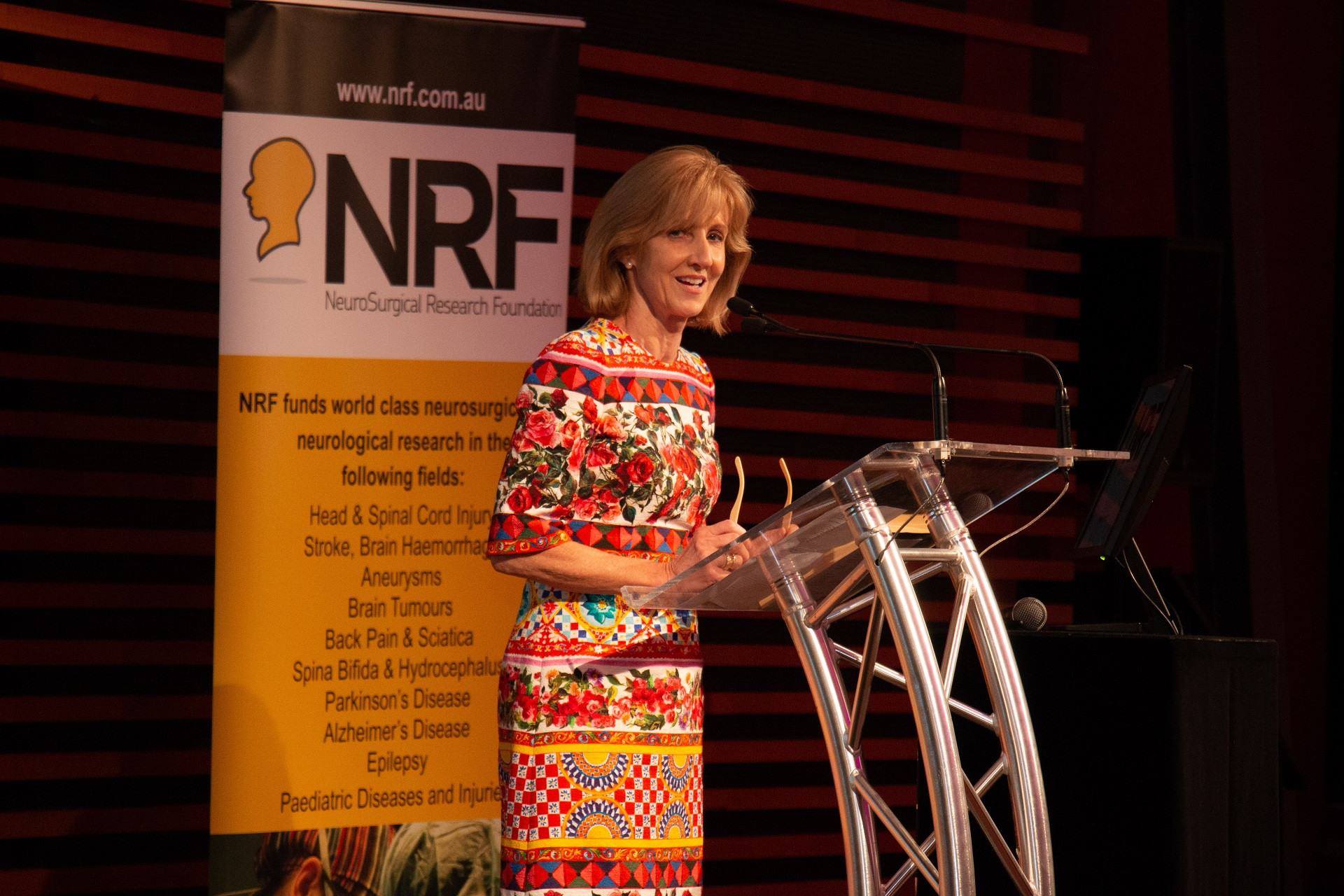 Carolyn spoke of her own great respect and admiration and sense of privilege in having worked with Donald over many years. 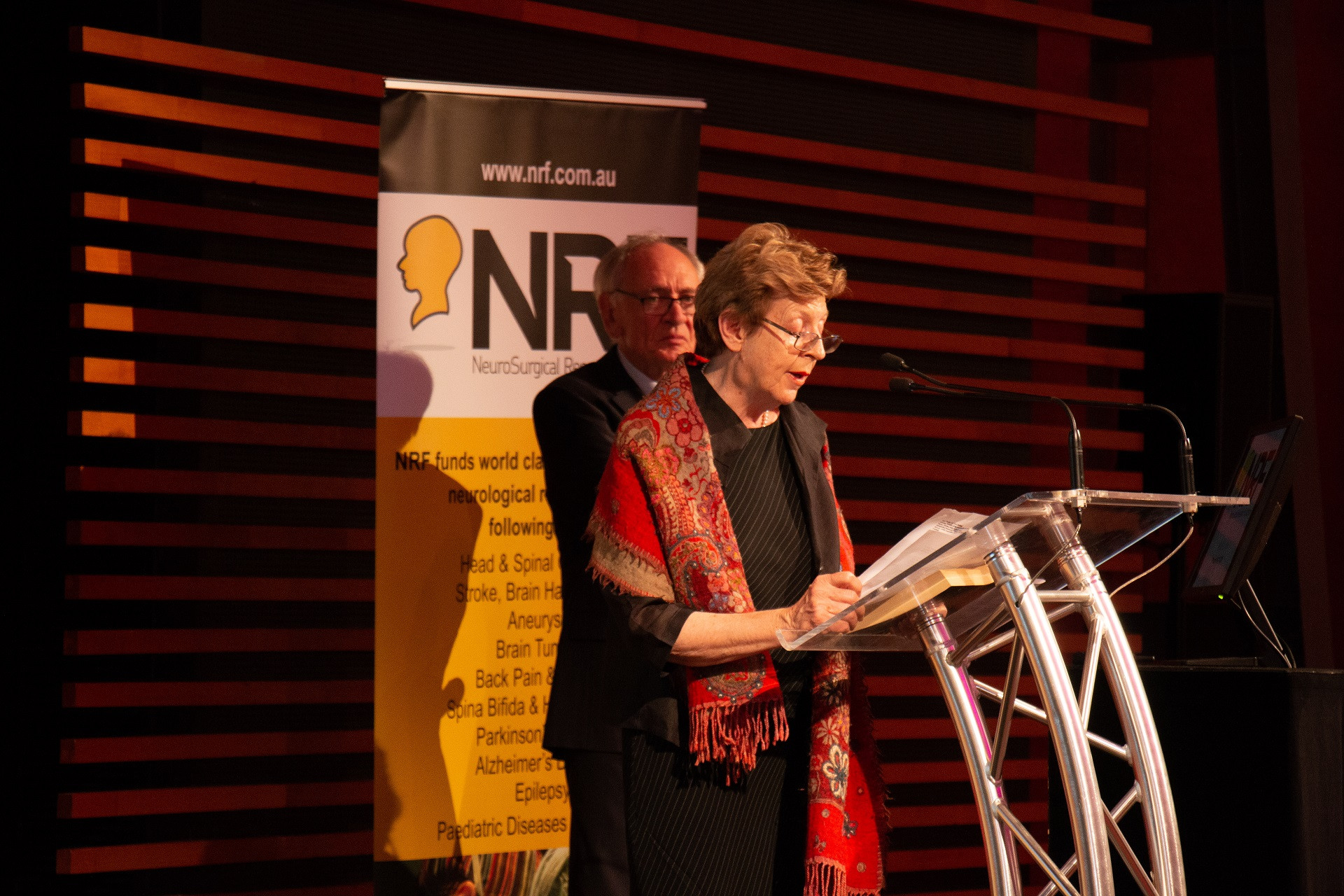 Peter Reilly spoke of his career long association, the pleasures of conversation , Donald’s breadth and depth of knowledge, wit and inimitable style. 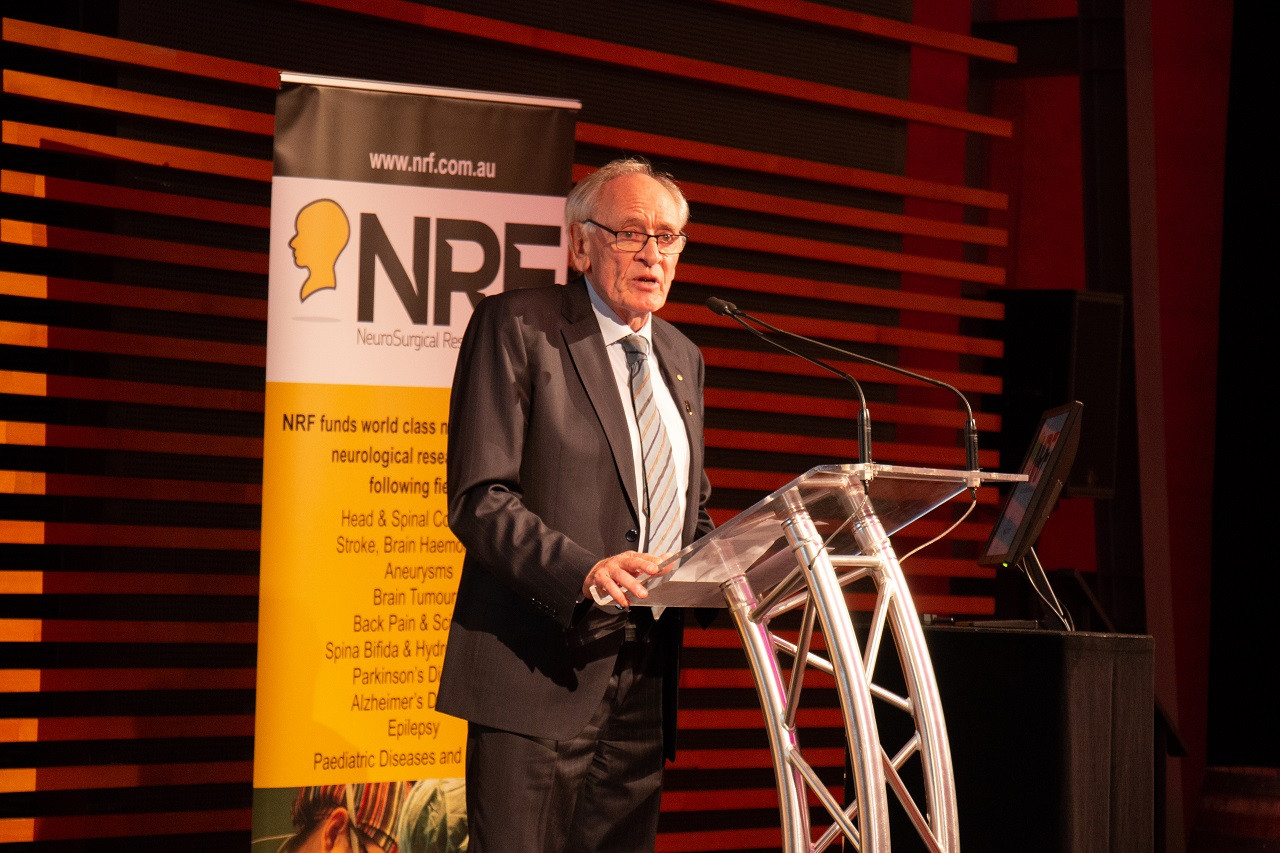 Each speaker spoke with affection, recalling the warmth of their friendship, Donald’s humanity and humility, his great learning, wisdom and wit. He was held in high regard for his integrity and lack of self-regard. His intellectual world was wide and deep, but his greatest passions were the better care of patients and the hope of improving this by research. In different ways each speaker affirmed Ken Clezy’s conclusion that we are unlikely to see his like again.

A silent auction was conducted encompassing books and commemorative items generously donated by the Simpson family. The dinner resulted in raising $12,000 to further neurosurgical research. 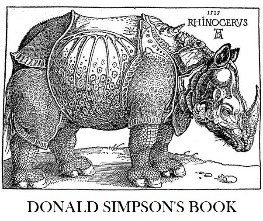 School of Health and Medical Sciences